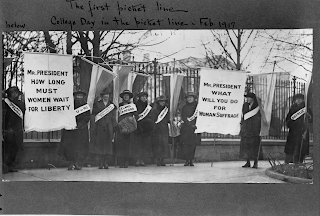 Sometimes the process of composing a piece takes you to unexpected and uncomfortable places. The question is, when you find yourself in that new place, what do you do about it? Embrace the change, explore what is out of your comfort zone, or head back to safer, more familiar surroundings? I recently experienced this while composing The Battle for the Ballot, which underwent a seismic transformation as I dug into American history.

When the Cabrillo Festival commissioned me in the summer of 2019 to compose a piece on the topic of the 100th Anniversary of the 19th Amendment's ratification, securing women the right to vote for the first time in our country’s history, Maestro Cristian Măcelaru and I had a phone conversation in which he expressed his desire for a piece for orchestra with narrator. In the fall of 2019, I began hunting for the writings and speeches of Suffragists. I started my research by reading books and searching through websites about the Suffrage Movement, looking for a compelling angle to shape the narrative. I came upon a speech by Susan B. Anthony that she gave on a lecture circuit after being arrested for voting in the 1872 presidential election (click here to read online). This was a very long speech, so I scaled back its content to get at the crux of her argument. By early 2020, I had finalized the text I planned to use from Ms. Anthony’s speech, and composed the piece later in the spring. 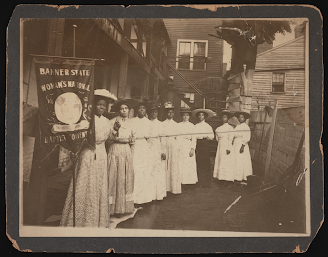 Fast forward to mid-June 2020. Since COVID-19 had shut down the physical festival, Cabrillo moved ahead with a two-week online festival that would conclude with a virtual orchestral premiere of my piece. Video producer (and Cabrillo percussionist) Svet Stoyanov worked with the Cabrillo artistic team to get all sixty musicians to video record their parts individually, and to mix their audio and videos together. Cabrillo brought in Santa Cruz actor Julie James to video record the Susan B. Anthony narrative. Simultaneously, nationwide protests were taking place over George Floyd’s death. Race issues were progressing more and more to the forefront of our country’s consciousness. As this was going on, the Cabrillo artistic team and I felt increasingly uncomfortable with Susan B. Anthony being the focus of the piece's narration. I had previously been aware of Ms. Anthony’s views on Black Americans, and how she was frustrated with those who wanted to secure rights for Black men to vote over women, but it wasn’t until the Floyd protests that I dug a lot deeper into the statements she had made and actions she had taken. What I discovered was horrific. In addition to the numerous disparaging comments she publicly made against Blacks, she aligned herself with white supremacists in order to secure the right for women to vote over Black men. I felt nauseated; something had to change. 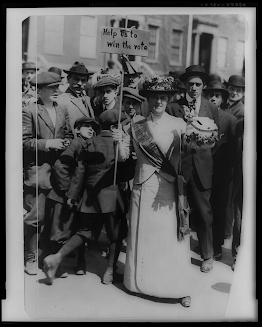 Near the end of June, Executive Director Ellen Primack and I had a phone conversation in which I asked if I could have a little more time to craft a new narrative that included multiple Suffragists, and she readily agreed. While Ms. Anthony's work was important in moving the country forward to giving women the vote, we strongly felt there were many other voices that deserved to be heard as well. I went back through my research, read more books, scoured many more websites, found speeches and articles written by a wide variety of Black Suffragists, removed most of Ms. Anthony’s speech, and added texts by Black Suffragists Carrie W. Clifford, Frances Ellen Watkins Harper, Adella Hunt Logan, and Mary Church Terrell, as well as by two additional white Suffragists (Jane Addams and Carrie Chapman Catt). We had just enough time for actor Julie James to record the new narrative before Svet began assembling the video. The final stage was to locate historical pictures of Suffragists; I searched the online database of the Library of Congress and found several pictures that Svet dropped into the video (and this blog post) that he shaped to both feature the Cabrillo musicians as they played, as well as to tell the story of the Suffragists. 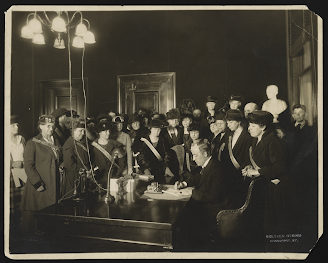 I am glad that when the moment arrived for me to change directions with the narration of the piece, Cabrillo fully supported my decision. By embracing this change, the narrative of the seven combined Suffragists is far more powerful than the voice of any single Suffragist, and my piece is stronger for this. While these seven ladies didn’t collectively work together or walk in the same circles, they all strove to achieve the same goal of securing women's right to vote.

I wish to add that our work as a nation isn’t complete. Perhaps it never will be, but we need to keep striving in pursuit of an ever more perfect union. Even when the Nineteenth Amendment was passed in 1919 and ratified in 1920, many states immediately passed laws that blocked Black women from voting by one means or another; this situation wasn’t rectified until Congress passed the 1965 Voting Rights Act which federally protected all citizen’s right to vote and put an end to discriminatory practices throughout the country. Nonetheless, we still witness today how various parts of our nation try new methods to disenfranchise Black women and men from voting. For instance, in June 2013, the U.S. Supreme Court removed a significant section of the 1965 Voting Rights Act, which had served to protect primarily Black voters from disenfranchisement. Not only is democracy a messy process, but it is something we must be vigilant in safekeeping for all of our citizens. May we all rise to the challenge when we feel the winds of change take us to unexpected and uncomfortable places.