An Afternoon at the American Academy of Arts and Letters 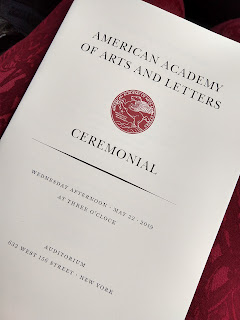 One of the holy grails in the music composition field is to receive recognition from the American Academy of Arts and Letters. This prestigious organization was founded in 1898, when it was chartered by the U.S. Congress, as the American Academy states, to “foster, assist, and sustain an interest in literature, music, and the fine arts.” The Academy maintains a roster of 250 highly accomplished elected members whose careers encompass a very wide cross-section of these fields; these members are elected for life and pay no dues. As part of the mission of the Academy, these members annually nominate individuals within their own fields to receive prizes, which serve to acknowledge the artistry of the recipients as well as offer financial support for their endeavors.

As I have learned over the years, a person can be nominated over and over (and over) again. It can be a bit of a guessing game – who might have nominated me? Which of my pieces should I send in for consideration this year? And when I didn’t get chosen… might someone nominate me again sometime down the road so I can try again? This past fall, I received a letter that I had once again been nominated. This time, I took a different approach to the application than what I’ve done in previous years – I sent in works that showed exactly who I am, with my narrative-driven,
mostly tonal musical language on full display. For once, I didn’t send in what I think they wanted to see, which I had previously (and erroneously) figured was a highly academic language. I have to give a hat tip here to John Mackey, who had received an award from the American Academy in 2018 for his wind ensemble music; seeing the Academy honor him for what he does so well gave me the push I needed to submit works that I feel show the true essence of my style. Incredibly, the committee honored me for exactly who I am. For this, I am eternally thankful. Their acceptance gives me the conviction that when we excel at what we do, no matter our musical language, someone will notice.

From the array of music awards annually given, I received an Arts and Letters Award in Music, a distinction that is annually given by the adjudicators to four composers who have arrived at their own voice (conviction!). This year’s fellow awardees of this category are Wynton Marsalis, John Musto, and David Fulmer. The award includes funding towards recording a work for commercial release, as well as a chamber concert featuring works by all four of us in the spring of 2020 at the Academy.

The Academy held their Ceremonial to honor all new members as well as award recipients on May 22nd in New York City. There’s lots of history and culture gathered within the walls of the Academy, starting with a room containing portraits of everyone who has been elected to be a member of the Academy (this year’s new musical members are Chen Yi and Meredith Monk). I was surprised and thrilled to find Helen Keller among the portraits. There are also paintings, sculptures, and other pieces of art tastefully displayed throughout the Academy. Additionally, all of this year’s award recipients and new members were invited to send in materials to be on display; these were placed around the Academy’s rooms as well.

What was most impressive, however, was the collection of people who were gathered together. Current Academy members and previous award recipients mingled with the freshly-elected members and new awardees among a cocktail hour, then a seated lunch, followed by the Ceremonial, and finally in a post-ceremony reception in which the audience who had attended the Ceremonial joined us. I’m not used to hanging out with the likes of author Ron Chernow (nice guy!) and stage director Peter Sellers (he congratulated me on my award!), let alone the staggering number of luminaries within the composition field, so this made for a unique and inspiring afternoon. The Academy provided a seating map of those of us sitting onstage for the Ceremonial itself, so we could get a visual of who was who. I made a point of seeking out all of the prominent women in the composition field who were in attendance: Tania León, Joan Tower, Melinda Wagner, Chen Yi, and Ellen Taaffe Zwilich (the only one I missed was Meredith Monk, who I didn’t spot until the Ceremonial was about to begin). These six women have
had an enormous impact on my career over the years, serving as role models for me and others following in their blazing footsteps. There were a good number of women composers there as well who were either current or previous awardees. It is not usual for me to encounter more than a few women in any particular concert or event, so to see so many of us gathered together was a wonderful reminder that the makeup of our field is indeed changing.

Before I knew it, the afternoon had passed, and I had to hop in a taxi to get to the airport for an evening flight home. This was truly a remarkable day, one that I’ll long savor in my memory. I look forward to returning to New York City and the American Academy next spring for the chamber concert! 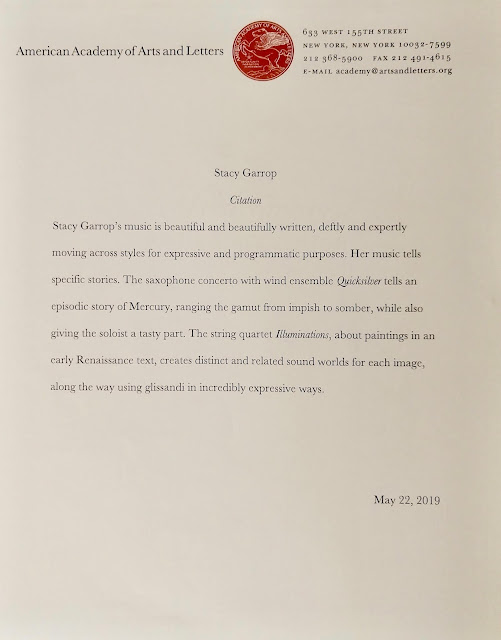