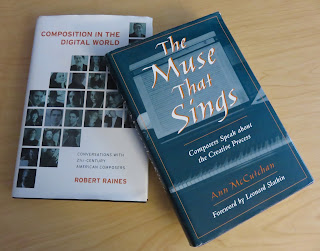 Every now and then, I find it very refreshing to read how other composers go about their craft. What is their process like? How do they make decisions? Does anyone else still use pencil and paper, or have people moved to composing digitally from the start?

In this blog, I explore two fantastic books that I’ve found to be immensely helpful in gaining insights on the processes of other composers; in a later blog, I will explore two more. All four are compendiums of composers covering a wide gamut of styles and approaches, and they are also all relatively recent.

The Muse That Sings: Composers Speak about the Creative Process

Her book stands out to me for two reasons. First, she writes each interview as if it were a monologue written by the composer him- or her-self. Gone is the Q&A format that I’ve read in other composer compendiums, which sometimes comes across as slightly tedious. Instead, it feels as though the composer is speaking directly to the reader, creating an unexpectedly intimate experience. McCutchan has done a remarkable job disappearing into the personality of each composer, leaving the reader to feel like a fly on the wall who is unobtrusively observing the composer at work.

Next, the composers go in-depth as they describe their compositional process. They talk about their organizational practices via note cards and colored file folders; they describe daily rituals and routines they go through to compose; they relate their innermost fears of failing to produce a well-written piece. Also intriguing are the details composers give on specific works they’ve written; for instance, John Corigliano’s description of how he devised ghost music for the opening scene of his opera The Ghosts of Versailles is wonderful food for thought on how to achieve a range of timbres. I’ve used this book in numerous classes for undergraduate composers, as it serves to quickly open their minds to a plethora of compositional methods that the students can explore. This book works particularly well when we follow up our in-class discussion of each composer by studying the works that the composers analyze in their chapters.

Composition in the Digital World: Conversations with 21st-Century American Composers

Raines interviewed twenty-eight composers, whom he divided into four groupings: well-established, up-and-coming, those who came to the U.S. from other countries, and radical innovators. These designations yield an intriguing mixture of composers covering a wide range of aesthetics and approaches. His interviewees include Martin Bresnick, Michael Torke, Jennifer Higdon, David T. Little, Kevin Puts, Mohammed Fairouz, John Anthony Lennon, Chen Yi, Daniel Wohl, Eve Beglarian, Pamela Z, and Eric Whitace. Additionally, he interviewed several of the same composers that McCutchan did, including Michael Daugherty, Steve Reich, Libby Larsen, Aaron Kernis, Joan Tower, Christopher Rouse, and Bright Sheng. As the books are separated by twelve years, the reader gains a deeper understanding of how these particular composers and their composing methods have evolved over the intervening years.

Raines has two main goals for his compendium: first, these are not “academic essays” but rather informal conversations. This allows the discussions to be far-ranging, based on each composer’s unique character. Raines is a composer, which bodes well for his interviewees as well as for the readers. His chapters read like loosely structured, casual conversations between the composers and himself. Topics span from their compositional processes and how they use technology to their views on the declining situation for record companies, as well as how a composer can continue to make a living in a world that is growing accustomed to accessing music for free.

Next, Raines frames the conversations on how the digital age has affected each composer. This covers a wide range of uses for technology from the smallest amount possible to all-encompassing, depending on the composer: only using a computer to send email; having their music on SoundCloud or YouTube; using composer software to notate acoustic pieces; utilizing computer programs to create electronic works; incorporating technology into performance art; creating an online presence; sending scores and recordings electronically to performers; creating MIDI files to help performers learn new works; and so on. As Raines points out, we have all been touched and changed by the advent of digital media. So, how are we, as composers, adapting to it?

Both books are tremendous resources for composers of any age. I’ve found myself referencing Ann McCutchan’s book many times over the past decade, gaining fresh insights from the composers and questioning my own compositional process by studying the processes of others. I suspect I’ll be doing the same with Robert Raines’ book for many years to come.